Once you’ve had Thanksgiving, repurposing the leftovers can be as simple as figuring out new ways to enclose turkey and stuffing.

Why not in a stuffed pepper?

Peppers are often stuffed with some sort of meat (here we have turkey) and rice (here we have not rice, but amped up bread cubes). 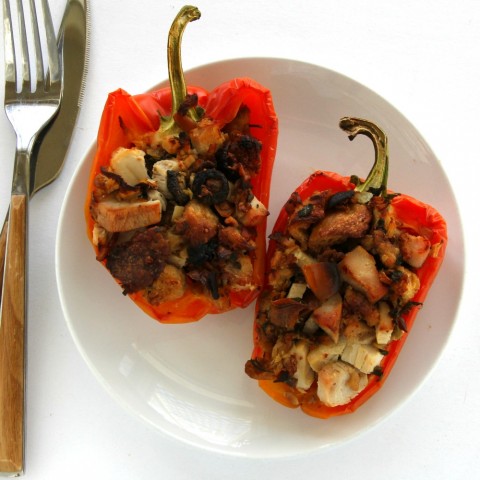 Feel free to use whatever stuffing you used for your Turkey Day feast.

What stuffing to use? My all-time favorite is this Rustic Herbed Stuffing with Greens [1]. It would be so good in here! But I’ve never met a stuffing I didn’t like, so I also like a version with dried figs. And of course, my classic 1st place award-winner Dorothy’s Southwest Stuffing [2].

That said, I won’t quibble if you want to use Stove Top (although it is too salty for my taste). I don’t judge, I just say “Bring on the stuffing!” 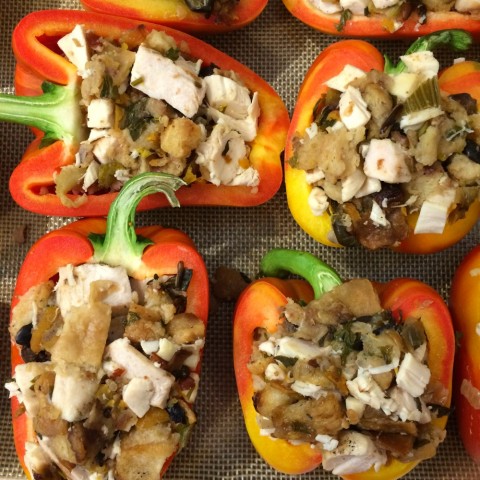 Peppers are stuffed and ready… 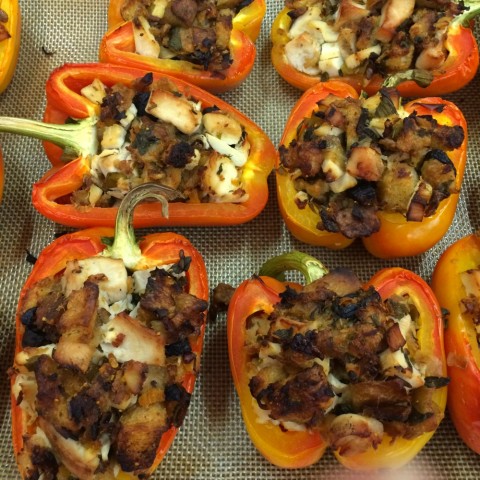 …and they’re out of the oven. I probably had the oven rack a bit high from a prior recipe, so the pointy edges of the stuffing got a tad charred. I like it this way, but if you don’t, make sure your oven rack is in the center.

Four ingredients, a little tanning time in the oven, and turkey has a whole new life. Turkey and Stuffing Stuffed Peppers are a super easy and delicious way to deploy Thanksgiving leftovers.

Troubleshooting: If your leftover stuffing seems dry, add a bit of chicken broth or vegetable broth to it while in the mixing bowl. You want the stuffing moist, but not soupy. If you forget this, you could always sprinkle each stuffed pepper half with 1 teaspoon to 1 tablespoon of broth before popping into the oven.

To cover or not to cover: Some recipes call for covering the baking dish or tray with foil. I don’t like to waste steps, and I find the texture of the peppers is better (to me!) if I don’t cover with foil. Wrapping with foil before baking sort of steams the peppers, making them softer and mushier. I like my peppers with a little body left. 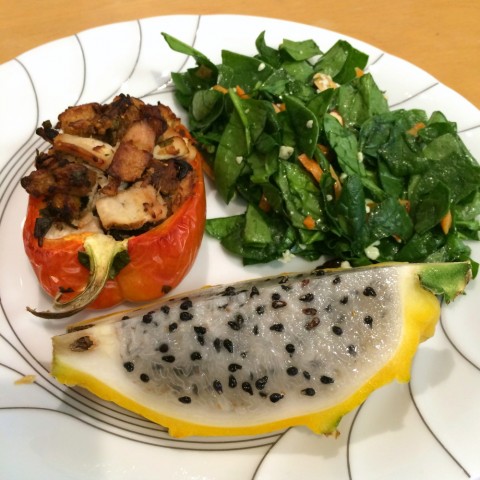 Here’s what dinner looked like that night. Add a green salad and some fruit and you’re good to go!

What are Enjoya Peppers? 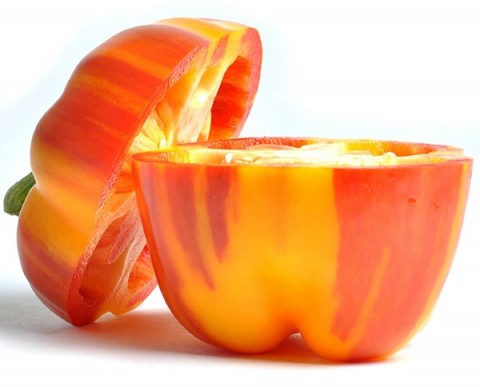 You might not have ever seen these peppers before! They’re colored more like a Gala apple than a bell pepper, with a rosy red striping over a canary yellow background. They were developed very recently. In 2013, Wilfred van den Berg found this beautiful variety, grown by chance, in his greenhouse in The Netherlands. He was impressed with the pepper’s unique characteristics, and partnered with a group of other greenhouse growers to develop the strain and produce enough quality and volume to enter the marketplace. Enjoya peppers [8] are pleasantly sweet, very crunchy, crisp and juicy, like other bell peppers. They are denser than other peppers, and each one can weigh a hefty three-quarters of a pound! They take a vegetable dip platter from blah to WOW, and of course they do very well stuffed. They make it easy to eat a rainbow of colors! (See the way the pepper is cut in the picture above? That’s NOT the way you’ll cut it for this recipe. For this one, you’ll cut it in half lengthwise.) 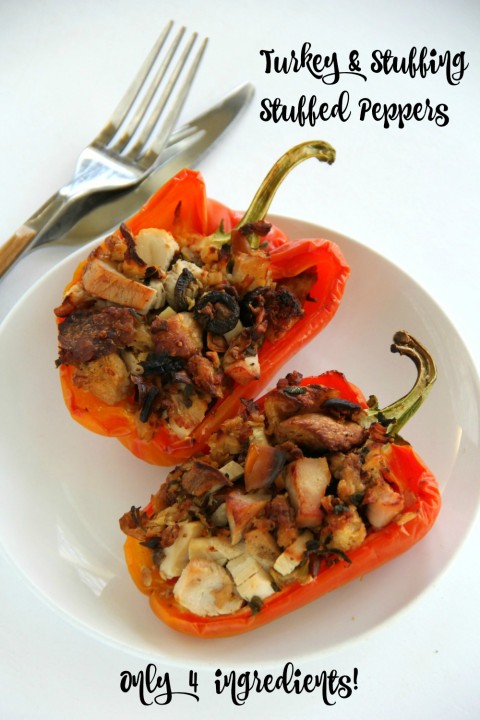