A dozen cool things to eat, cook, use, read and think about this month. 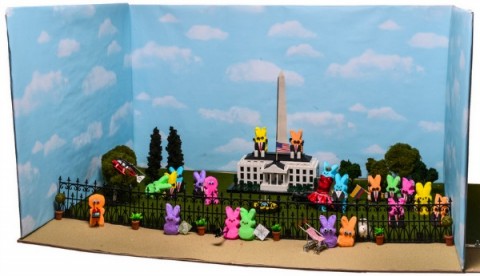 Sure, Easter is a beloved holiday, but for those of us who love marshmallow Peeps (raise your hand!), the annual fun is in awaiting the creative entries into the Washington Post Peeps Diorama Contest. This year was the 9th such contest in which candy Peeps play starring roles in recreations of current events (ice bucket challenge or measles outbreak, anyone?). This year’s finalists included “Call of Booty” (a spoof on the Kim Kardashian photo that took over the Internet), “Peep City: The Sweetest Place on Earth” (homage to Ocean City) and my favorite, “White House Trespeepers,” (shown above) a roundup of embarrassing security breaches. Look for tourists with a selfie stick, a crashed drone, a trespeeper running across the lawn with a knife, and a Peep toddler slipping through the fence, among other wry treats. See the finalists here [1]. 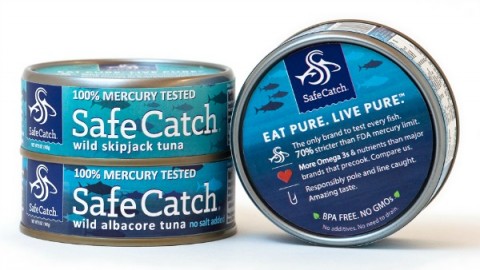 By now we all know a healthy diet includes lean protein, such as fish. But some fish, especially canned tuna, can have high mercury levels. While mercury has always been a part of nature and present in trace quantities, man-made mercury pollution has fouled oceans and increased the levels in some fish. Canned tuna is not regulated for mercury levels, so one canned tuna can have a tiny amount of mercury that the body can process out, while another can have levels nine times what the EPA recommends as safe to eat in one day. Before, there hasn’t been a way to tell, but now Safe Catch [2] is introducing a canned tuna in which every fish is tested for mercury and only pure fish are used. Safe Catch is the only 100% mercury tested tuna on the market. It’s also cooked using a unique method and packed without oil or water. The ShockD family tried it and likes it! Safe Catch Wild Skipjack retails for $3-$4 a can. Wild Albacore (including a no-salt version) retails between $4-$5 a can. It is carried by Sprouts markets, and should be in 600 stores by the end of April. 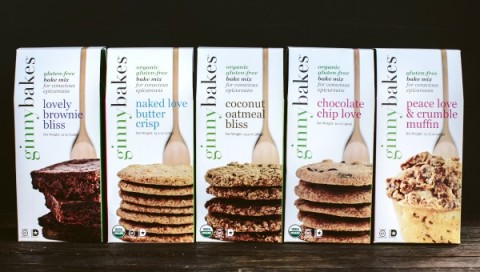 Gluten-free folks are getting luckier and luckier, as companies realize they are an audience waiting to be better served. Into the arena comes ginnybakes, with organic, gluten-free, non-GMO, kosher, no-preservatives baking mixes  for “conscious epicurians.” Now you can have your gf cookie and bake it yourself, too. There are brownies, butter cookies, coconut oatmeal cookies (I dare you not to put some chocolate chips in there; I did!) and muffins. Look for them at Whole Foods or Bristol Farms, other regional specialty stores or online at ginnybakes [3]. 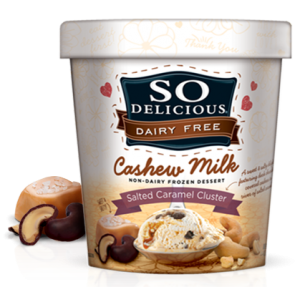 With fewer calories but every bit as much flavor and “mouthfeel,” So Delicious brand Cashew Milk frozen dessert will satisfy vegans and those who can’t or don’t want to eat dairy but are still missing their ice cream. They’re creamy without cream, and the flavors will have you swooning — snickerdoodle, salted caramel, cappuccino, dark chocolate truffle and creamy cashew. My family fell hard for the salted caramel [4]. About $6, rolling out nationwide in natural and conentional grocery stores. 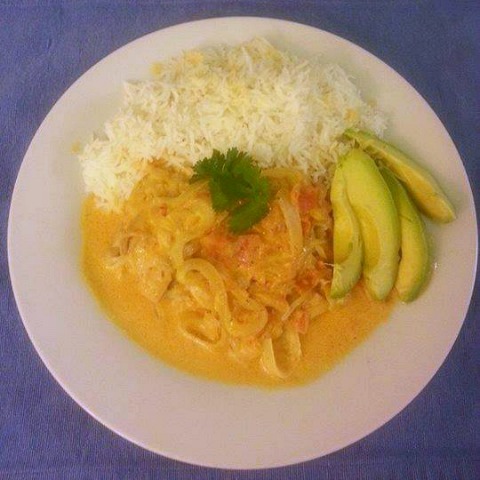 5. Look who is making my recipes! 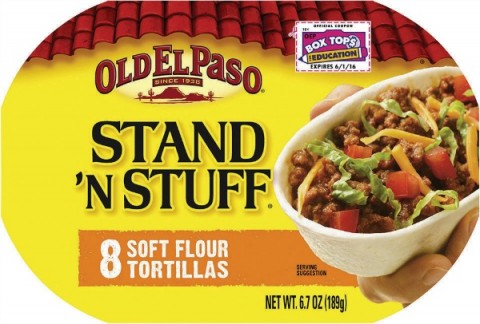 I’m a little bit in love with these “Stand ‘n Stuff” soft flour tortilla bowls [12]. I found them on the shelf with the other taco shells, and figured they would be fun to stuff with taco fixings, burrito innards, salad, or whatever struck the fancy. They are! You can see them in action in my Easy Weeknight Taco Bowls [13]. Let me know what fun things you use them for!

You know how much we love our spuds, right? Well, this big, honkin’ 6-ton, 72-foot long truck is the most fun way to get your spud on. Created by the Idaho Potato Commission, it travels the country each summer, visiting fairs and festivals in many states to spread the word about taters. It starts later this month — April 27 — in Kentucky, then moves on to Georgia, Arkansas, Virginia, Ohio, Texas, Missouri, Kansas, Washington, Nevada, Illinois, Tennessee, Pennsylvania and Nebraska. It will be in Pasadena, California, not too far from me, on July 11. I just put that date on my calendar! Check the tour schedule [14]  to see if it is coming to a spot near you, and then take the family to see it. You won’t be sorry.
♥ ♥ ♥ 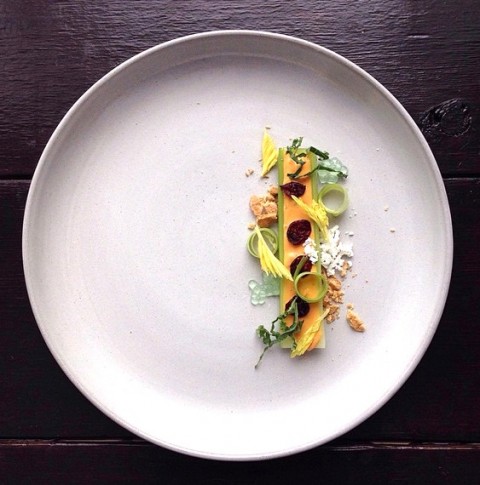 Go right now and subscribe to the Chef Jacques LaMerde Instagram account [15]. Are you back? Now think about the name for a second….do you get it? Your high school French should come in handy. This is an absolutely brilliant satire, in which all the plates appear to be from a 5-star restaurant — tiny bits of this and that, so artfully arranged in a precious still life — but they are actually composed of ingredients from the junk food aisle. But his descriptions take it over the top. For example, the picture above is described thusly: “I CALL THIS DISH “BUGS ON A STICK” B/C THE CRAISINS R THE “BUGS” AND THE CHEEZE WHIZ/CELERY IS THE STICK. ALSO CELERY SODA CAVIAR, GRAHAM CRKR SOIL, CANOLA OIL PWDR + KALE SHREDS.” 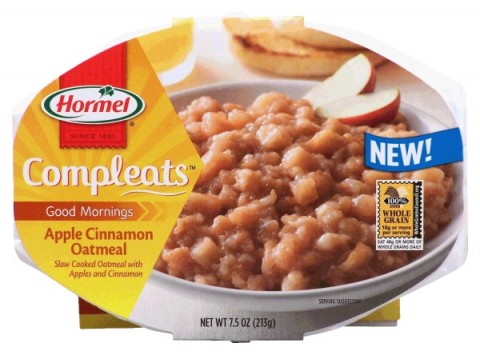 Bowl of cereal, fried egg, toast, bowl of cereal, fried egg, toast, bowl of cereal… when the morning breakfast routine becomes just too repetitive, I like to break out of the rut by trying something new. This Apple Cinnamon Oatmeal [16] did the trick for us. It tastes like a cross between comforting oatmeal and apple pie filling, and was a warm treat on a recent nippy morning. 1 minutes in the microwave, only 160 calories, and we have a breakfast to remember. If oatmeal isn’t your thing, they have a sausage, or bacon, or ham breakfast scramble, and a sausage gravy and roasted potatoes to stick to your ribs. 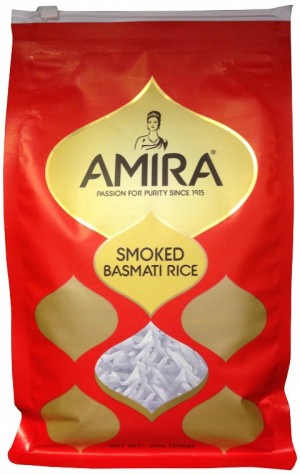 This smoky rice is wildly good! Open the package and sniff and you’re at a backyard barbeque. Put some in the rice cooker and for the next 30 minutes you will say to yourself, “Has someone lit a fire in the fireplace?” Scoop out the cooked rice as a bed for your Meatless Monday roasted vegetable bowl, and you won’t miss the meat, not for a second. I introduced you to Amira brand basmati [17] last month, and we marveled at how it expands to a length 2 1/2 times the normal. This flavor will have you ignoring that bag of regular rice forevermore. 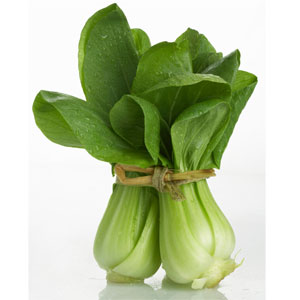 Nutrient-dense foods are foods that have a lot of nutrients but relatively few calories. In general, these are the types of foods we all should reach for whether snacking or making a meal. For example, although an apple and a small bag of pretzels both have about the same number of calories, the apple is a better choice because it provides fiber, vitamin C and potassium for that calorie expenditure. Similarly, a serving of watermelon and a 12-ounce soda both have about 150 calories, but the watermelon wins the nutrient density contest because it has vitamin C and fiber, while the soda  has simple sugars or “empty calories.”  So reach for a potato instead of potato chips, a banana instead of a soda, fruit instead of cake, extra vegetables instead of a dinner roll and vegetable snacks instead of candy and sodas. 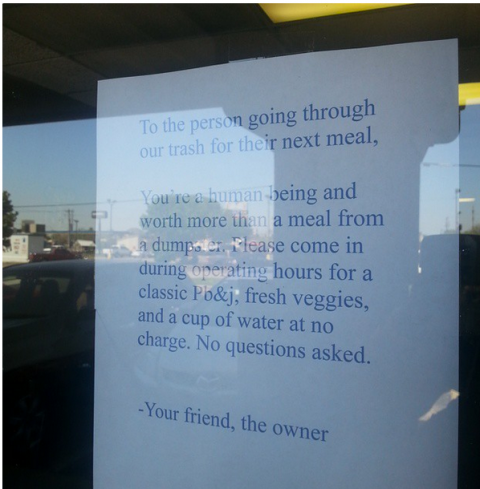 If you find yourself in Warr Acres, Oklahoma, please patronize the sandwich shop P.B. Jams [18]. When shop owner Ashley Jiron saw that someone had been digging through their dumpster in search of food, she left the message above on the dumpster and the front door of the shop. It’s just the right thing to say, to do, and to feel. Standing ovation from us.

Disclosure: Safe Catch, GinnyBakes,  So Delicious, Hormel and Amira sent products for review. There was no expectation of a positive review and all opinions are, as always, my own.