I just binge-read a newish book, and I want to recommend it to you. It’s my favorite kind of reading, in which there is a pivotal dish that serves as a secondary character in the novel.

“Luck, Love & Lemon Pie,” by Amy E. Reichert, is a story about an exasperated wife and mother who makes a play to reignite her marriage—and risks everything in a gamble she hopes is a sure bet. When she notices her husband seems more interested in the casino than her, she’s more bothered that she isn’t upset than by her husband’s absence from home. She picks up poker as a way for them to spend more time together—and reignite their marital flame. It turns out she’s great at it, and the book not only tells the story of modern marriage, but also takes you poolside to Vegas for the poker championship.

Most importantly to us here at Shockingly Delicious, the food that starts the book off is called Anniversary Lemon Custard Pie.

Let’s listen in as protagonist MJ waits for her husband at a restaurant at what is supposed to be their anniversary lunch. He’s three hours late, and has apparently stood her up.

“It took MJ one hour forty-seven minutes and three old-fashioneds to eat the entire anniversary pie herself. All that remained in the empty tin were a few smudges of lemon cream sprinkled with flakes of crust, but her stomach didn’t seem to mind the alarming influx of calories…

… “It wasn’t until the server had appeared with the pie that MJ had remembered special-ordering it for today’s lunch. She’d called the chef weeks ago to arrange for her to make this particular pie and serve it at lunch, when Chris wouldn’t be expecting it. For anniversaries past, Chris had always baked it, but last year he had said he didn’t have time. So after twenty years, she decided it was her turn to bake. She’d attempted and failed to make it three times before accepting her culinary limits, and gave his recipe to the chef. It was meant to be a surprise, a romantic gesture on their twentieth anniversary — a celebration. Instead, alone, she had grabbed the pie and a fork and settled into her dining chair, mollifying her disappointment one flaky bite at a time, ignoring the judgey looks of the other restaurant guests.”

See, right then, right there, I was hooked on this book, and I also knew I had to make this pie.

Luckily for us, the author helpfully has her husband character, Chris, provide his recipe at the end of the book. 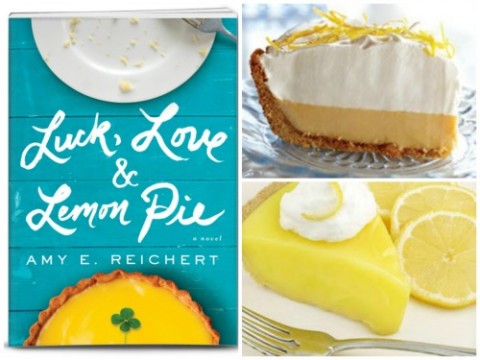 Sweet, tangy, smooth, flaky, seductive Lemon Custard Pie was the way Chris Boudreaux lured MJ to him, and it became the pie he made each year for their anniversary. It's from the book "Luck, Love & Lemon Pie" by Amy Reichert.

Having discovered this author, I now can’t wait to read her prior book, “The Coincidence of Coconut Cake.” I’m sensing a theme…alliterative title, with a scrumptious sounding recipe! 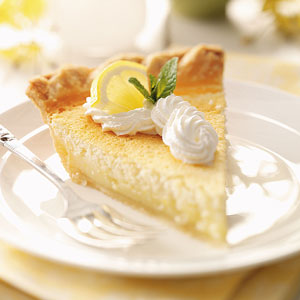 This is a recipe the book recommends [3] if you don’t want to make Chris Boudreaux’s particular version.

Turn on the oven and have some fun!