A few years ago, Pepperdine University law professor Tom Stipanowich, our family friend, wrote a poem to his family’s Christmas bird. He heard they were having turducken at his sister-in-law’s house, and that was all the inspiration he needed.

Waxing poetic about poultry? It simply doesn’t get any better than that!

If you’re having turducken for Christmas, you’ll want to read this at the family table. (What’s turducken?  A boned chicken inside a boned duck inside a boned turkey, roasted to perfection.)

Behold, the best poultry poetry you will ever read.

What’s the cube of Chick Fil-A?
What transforms Thanksgiving Day?
Makes superior confit;
Views normal birds with sheer conceit?
It’s an avian conjugation that has mesmerized the nation.
We’re now forcing altogether birds of more than just one feather!
More amazing than the marriage of the ostrich and the budgie,
This triple threat’s more versatile though relatively pudgy…
It’s TURDUCKEN!!

This mysterious chick/duck/turkey’s
Progeny is rather murky;
But to speak without precision,
Let me ask you to envision…
Chicken Little, Turkey Lurkey on a double date with Daffy…
An unparalleled conjunction in all birdie bio-graphy!
When these creatures came together in one glorious combination
There emerged the rarest archetype in all of Earth’s creations.
Lo, TURDUCKEN!!

Though this fabled bird is flightless,
Double-beaked and nearly sightless,
It has fame that knows no bounds
For its repertoire of sounds.
If you listen very closely as its throat begins to wobble,
You can hear a song composed of alternating clucks and gobbles!
You’ll be more amazed to learn of yet another startling fact:
If it’s threatened from astern its derriere begins to quack!
That’s TURDUCKEN!!

While it’s technically a sexaped,
It rarely moves, but sits instead;
This bird-in-bird-in-bird abides
A girth that’s naturally triple-wide.
While its speed compared to other birds is hardly supersonic
How’d you like to try to gallop with a double-bird colonic?
Though it’s slower than a dodo when it’s moving at full throttle
When you’re holding in two other birds, it’s a triumph just to waddle!
Oh, TURDUCKEN!! 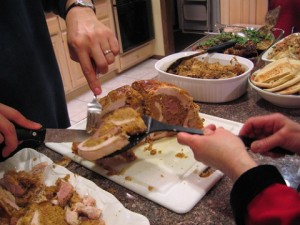 If you’d make your chicken fatter,
Stick a turkey in its bladder!
With more lubricant and luck,
Stuff in several yards of duck!
Though one might assume a bird resents extraordinary pressure,
As it happens, most report that there’s an element of pleasure!
Yet a not uncommon postscript to these feelings of elation
Is when too much bird compaction leads to some regurgitation.
If your chick begins to lose its smile, be sure to move away;
It will disgorge, in just awhile, a fine tur-duck pate!
Some seize this opportunity in order to insert
Some chocolate cake or pudding for a turducken dessert…
Aahh . . . TURDUCKEN! 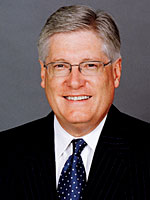 Want to make your own Turducken?

I might ask why (most people seem to buy them), but hey, who am I to judge? J. Kenji Lopez-Alt over at Serious Eats [5] walks you through the arduous process, and emerges victorious!

What to serve with Turducken?

If you are serving Turducken for Christmas, you might want to take a look at what appears to be the perfect side dish: a “loaf” of side dishes! [6]