Well, maybe “butt-ugly” is a little harsh, but you have to admit this citrus is cosmetically challenged.

Ah, but what flavor!

“A bad Sumo is equal to what a good naval orange tastes like,” says Seth Wollenman, the brand manager for this new fruit. In other words, the Sumo’s worst day is the naval orange’s best day.

And the Sumo’s best day? Sublime. 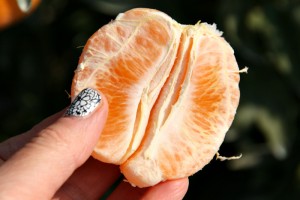 [1]A little lumpy, a little bumpy, a little like an orange-colored Sharpei, if that dog were shaped like a blob, the Sumo Citrus [2]  is the Volkswagen Bug of the produce world – so ugly it’s cute!

It’s the biggest mandarin you’ve ever seen, probably the sweetest, too, and comes with its own little topknot handle. 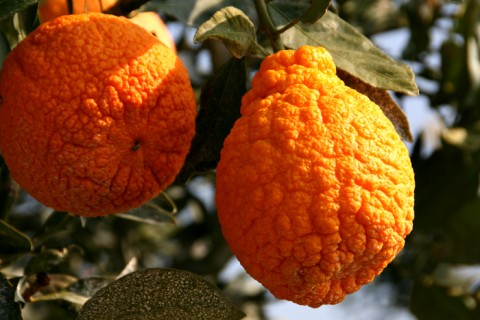 [3]Loose skin that makes it easy-peel, seedless, endlessly sweet with melt-in-your-mouth segments, with a unique aroma – all characteristics of a winning fruit – this citrus has been #1 in Japan, but is brand new to the U.S.

It’s called Dekopon in Japan, where it originated in the 1970s; its parents were a tangor (cross of orange and Satsuma mandarin) and a ponkan (large mandarin). Although it is homely, it was prized for its magnificent flavor – sweet yet balanced by a nice acidity – and became not only the favorite, but the most expensive citrus, fetching $8-$10 a pop. 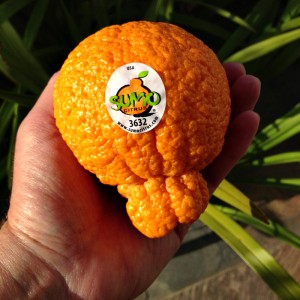 [4]Fast forward to the 1990s, when a citrus grower in California imported some budwood – branches for grafting new trees – and put them in official quarantine, which is required to protect U.S. growers from pests and diseases that might be introduced from plants that come in from other countries and might devastate an entire industry.

Fast forward a few more years, and the budwood was finally out of quarantine, acquired by Suntreat Packing & Shipping Co. [5] of Lindsay,Calif., 50 miles outside of Fresno, and planted on farms in the Central Valley. 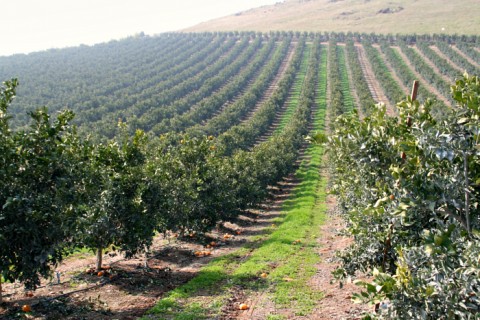 [6]The climate here is ideal for it, and in 2007 a few growers were quietly given plants to try. The next year, there was a major planting, and the first crop emerged in 2011. Last year, Melissa’s Produce distributed the crop to what is called “food service” – restaurants and other food venues such as sports arenas. This year the crop doubled in size, so it is the first season the fruit will go national and be more widely available to consumers such as you and me. 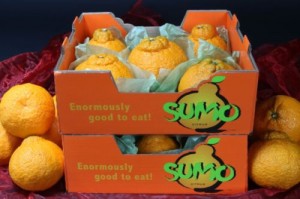 [7]They’re in season rightthisminute, through March, so grab your keys and head to the store. If you don’t see them in your produce department, ask your produce guy to get you some. You might find them sold loose, either by the piece or by the pound (probably $3-$4 per pound), or in a consumer carton like this ($15-$20). You can find them at Whole Foods, Gelson’s, Bristol Farms, or consult this list of stores [8] in Calif. and outside Calif.

They are absolutely, positively worth the effort. 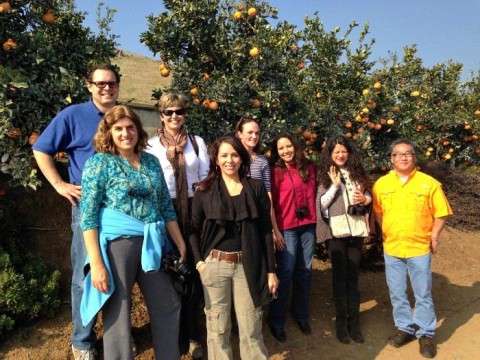 [9]Suntreat was kind enough to host a small pack of food writers on a recent tour of their Sumo fields. As we tromped the rows, we learned that in addition to its looks, it is different than other citrus because the trees must be grown, pruned, thinned and treated differently. Trees are grown to be shorter than other citrus… 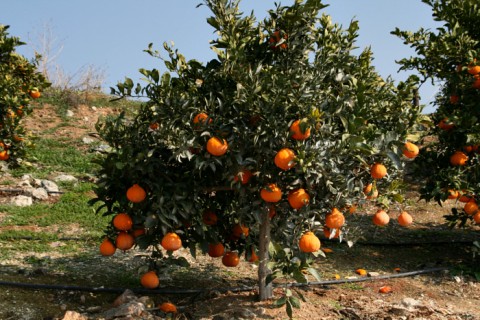 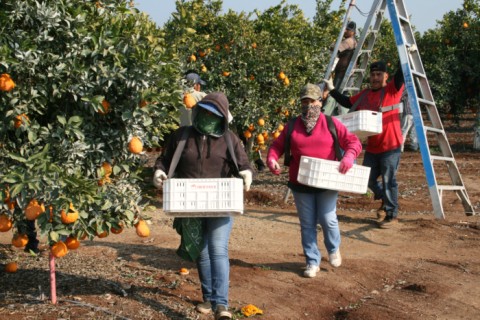 [11]…the rind is so delicate that the fruit must be clipped off the tree by hand and put into small totes, not the huge 900-pound bins that other citrus fruits are piled into…

…and that it must be stored or  “cured” after harvest to harden the rind up enough for shipping and to lower acidity and increase sweetness.

Sweetness? Wanna talk about natural sugars? Measured by a refractometer, the minimum brix (measure of natural sugars) for a Sumo is 14, with 16-18 being the highest. For comparison, a brix of 12 for a naval orange is considered high, and very sweet.

Its time has come!

Thanks for Melissa’s Produce [13] for arranging this trip and to Suntreat Packing & Shipping for kindly touring us through their fields.