A new hybrid of 75% plum and 25% apricot, this deeply red Plumogranate Plumcot is truly nature’s candy.  Let’s call it a Skittles plum, because that’s how sweet it is!

It tastes mostly like a plum with a hint of pom, thus the name. And, my friends, the deep red juice that runs down your arm will stain like pomegranate. (You have been warned about the staining part, which is actually worth it once you try the fruit. Just don’t wear a white shirt, OK?) 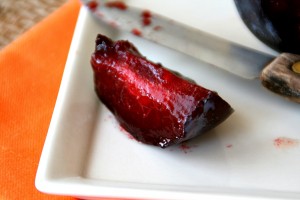 [1]You could slice them and put in your salad, or make a crostata or galette or tart, but honestly, we ate them over the sink, and fighting broke out over who was getting the last one.

Get them now, while they are in season. They’re about $3 a pound (sometimes just labeled plumcot in the store), and grown in California.

A sample of this fruit was sent by the produce experts at Melissa’s Produce. 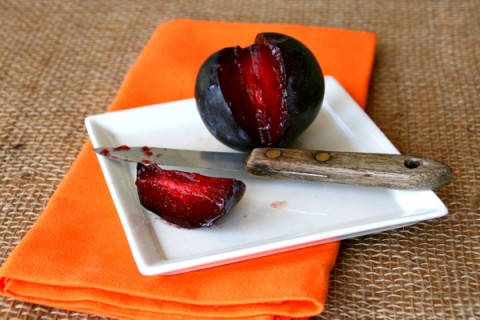