Three new hotsy totsy products crossed the Shockingly Delicious kitchen in recent weeks, and they added some welcome zing to our lives and our plates! All are from small manufacturers, and one is a kickstarter project just getting off the ground. We like to support new artisan food purveyors, especially when they’ve concocted something totally delicious. 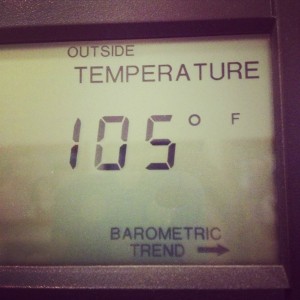 In honor of the Southern California heat wave last week (103F Tuesday, 104F Wednesday, 105F Thursday at my house!), take a look at some of the hot stuff we’ve been sampling lately.

Henry J. Miller sat next to a beekeeper on a plane when he was 11, and decided he needed to save the world from Colony Collapse Disorder. He got a beehive for his 12th birthday and started selling honey by the side of the road to donate to the preservation of honey bees. He added spices to extend the use of honey from just a sweetener and suddenly he had a little spicy honey company on his hands. Apparently he was on to something special because it’s grown over the past few years and in fact, recently he was on ABC’s “Shark Tank.” (I adore that show! Find his pitch at the 24:28 mark [3]).

He made a deal with a couple of sharks but ultimately the deal fell through. Henry’s Humdingers has four unique flavors all made with raw, unprocessed Washington state honey: Grumpy Grandpa (cayenne and garlic), Naughty Nana (ginger and pepper), Phoebe’s Fireball (chipotle and cinnamon) and Diabolical Dad (Habanero and lime). Here’s what I have done with them – stirred into my margarita as a spicy sweetener, drizzled over salmon after grilling, as an ingredient in cole slaw dressing, in my cooked beans, and over my brie wheel for appetizers. Sure, it’s a sweetener, but so much more. I loved it, as a versatile condiment, and as a whole new concept.

The company’s tag line is “The Clever Cook’s Secret Ingredient.” That seems apt to me!

He has a current Shark Tank special going on — $19.95 for all four flavors. You can buy it online [4], or use their store locator to find the honey in specialty retailers [5].

Just in time for National BBQ month this month comes A&B American Style Pepper Sauce. Made from fresh Red Fresno peppers (and a touch of zippy Habanero), sweet carrots and onions and blended in small batches in Brooklyn, this is a no-sugar-added artisanal condiment that will have you smacking your lips. It is the neon orange love child of a Carolina BBQ Sauce and a French Mirepoix, with a vinegary kick that earned the company the title of Best Food Artisan of 2012 by Serious Eats. It is just hot enough to matter, but not so hot it blows steam out of your ears. I splashed it in my tomato juice, onto my burrito and my breakfast eggs, squirted a bit on some pulled pork, and dipped my fried Idaho fingerling potatoes in it. If you are a fan of Tabasco, you will love this! 8-ounce bottle/$12/at Sur la Table, online [7], and specialty retailers across the country [8]. 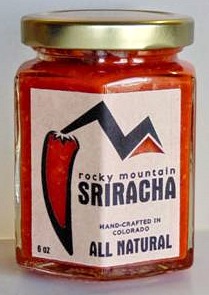 [9]Another in the no-preservative, full-flavor genre, Rocky Mountain Sriracha bursts with hot goodness. It’s far brighter looking and tasting than traditional Sriracha (several tasters here preferred it over the regular rooster), and it comes in an easy-to-scoop wide-mouth jar. Made with fresh Fresno peppers, organic agave nectar, organic sea salt, organic garlic and vinegar, it is bottled fresh right after mixing, rather than fermented. The company was created by business students at Colorado Mesa University who partnered with a local entrepreneur after they became aware of the problems plaguing the Huy Fong Foods Sriracha factory in Irwindale, Calif. Apparently a whiff of a potential Sriracha shortage was all it took for them to start a new business. They have a Kickstarter campaign [10] going on to raise money for their first commercial batch.