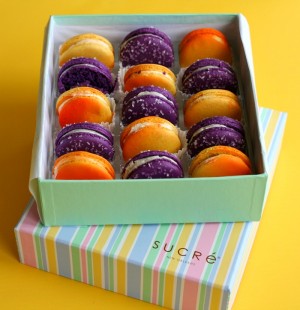 [2]buttercream with a Southern peach marmalade center).  We particularly enjoyed the Peaches & Cream version, which are perfectly suited to the rich fruit flavors of the season. You might think that isn’t enough cookies in a box, but with premium flavors like this, you only need one to satisfy you.   They’re created by Sucre [3], a sweets shop in New Orleans. Be warned, you will spend an hour on their website, dreaming about tasting all their delicate treats;  it might be the best hour of your life. Are these too pretty to eat? Maybe, but that didn’t stop us. $30 for a box of 15; these flavors available until the beginning of August. After that, choose another of their seasonal favorites. Come back and tell me how you like them! 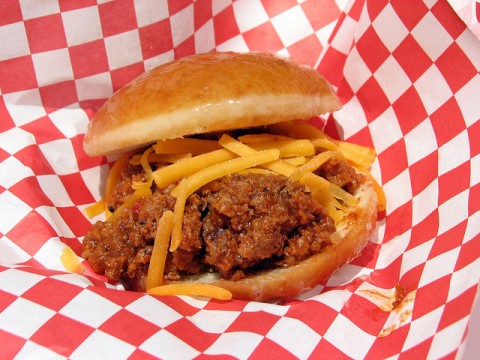 [4]2. Orange County Fair: The OC Fair [5] runs through August 11, and this year’s theme is “Come and get it!”  Fair food is one of summer’s guilty pleasures. One summer at the OC Fair I tried a fried Oreo AND fried Kool-Aid. Now that was truly weird. I might need to get out my stretchy pants and try this year’s Chicken Charlie’s Krispy Kreme Sloppy Joes, pictured above. How great would that be — sweet, salty, meaty? There are also:

Fridays are a great day to go because they have $2 Taste of the Fair food from noon–4 p.m., plus competitions and contests, food sculpting, celebrity chefs and more. Will I see you there? 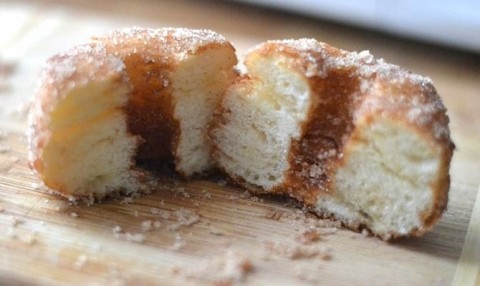 [6]3. Making Cronuts at home: Speaking of fried delicacies, have you heard of Cronuts? It’s a cross between a donut and croissant — fried in oil, dusted with sugar, filled with cream and topped with glaze — taking the world by storm since it was introduced earlier this year at a New York City bakery. Want to make a cronut at home? [7] The Daily Meal has the formula. Keep those stretchy pants at the ready. {Photo above by Emily Jacobs} 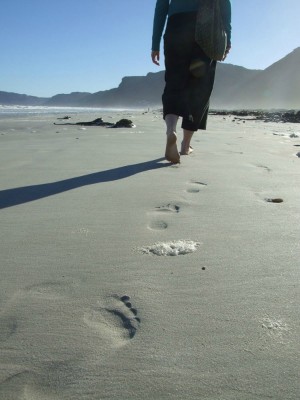 [8]4. Exercise: The Washington Post [9] reported that exercise seems to be the most promising thing you can do to keep your brain at its best. Consistent evidence shows that “people who engage in aerobic activity – for instance, walking several times per week – show improvements in their cognitive function, particularly in their ability to switch quickly from task to task.” That and a healthy diet (such as following the Mediterranean Diet) also reduce dementia risk, but researchers warn that supplements, vitamins and similar products probably don’t help. Hmmm…are macarons, Krispy Kreme Sloppy Joes and Cronuts on that diet list? Prolly not.

[10]5. Sweet and salty popcorn: I regret opening the bag of G.H. Cretors [11] Chicago Mix popcorn [12], which is the highest praise I can offer any snack food. It was gone in a flash, forever imprinted on my taste buds. A perfectly balanced combo of caramel corn and cheese corn in the same bag (two cheese to one caramel), this munchy should be pictured in the dictionary under the term “addiction.” I also highly regret opening their Caramel Nut 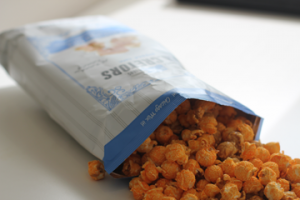 [13]Crunch (which puts Cracker Jack to shame), and their Just the Caramel Corn [14]. I eagerly anticipate my regret upon opening their Kettle Corn and their Just the Cheese Corn [15]. To counter the addiction, this wildly good stuff is non-GMO, gluten-free, kosher, and free from all artificial colors, flavors and preservatives. They use brown rice syrup instead of corn syrup, and the kernels are large, fluffy and perfectly popped. It’s a shame the’re available in grocery stores, online [16] and on Amazon.com, because that means I can have them whenever I want. And that would be all the time. About $3.99 per bag. 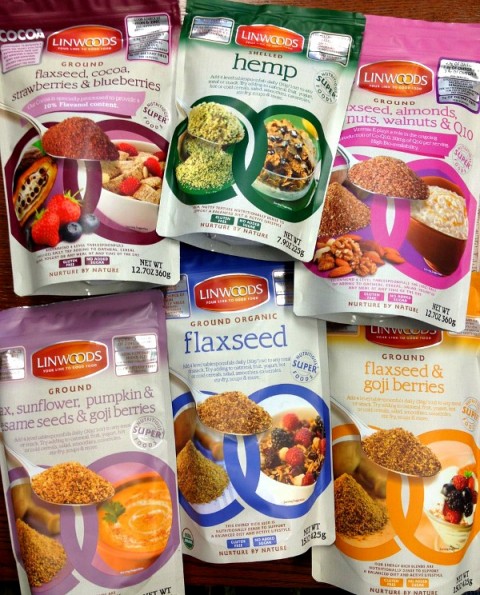 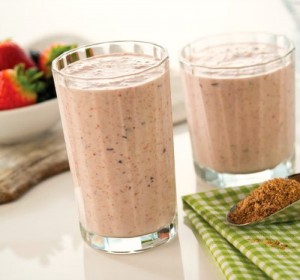 [19]of essential fatty acids, protein, iron, calcium, magnesium and essential vitamins and minerals. I’ve whirled them in smoothies, stirred into my morning oatmeal or yogurt, and sprinkled atop my brown rice bowl concoctions and into my soup. They’re gluten-free, organic, with no added sugar, and available in supermarkets and specialty food stores such as Whole Foods, Bed, Bath & Beyond and Bristol Farms. 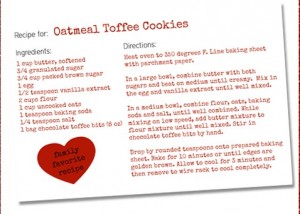 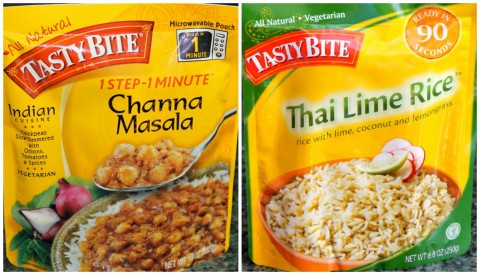 [22]8. Instant meal inspiration: Tasty Bite offers totally delicious, flavor-packed Indian entrees, Asian noodles, seasoned rice dishes and meal inspirations that are cooked, packed in pouches, ready to quickly reheat in the microwave, and shelf stable for up to 18 months. They’re little miracle meals that solve all kinds of problems in the most delicious way. I ate the 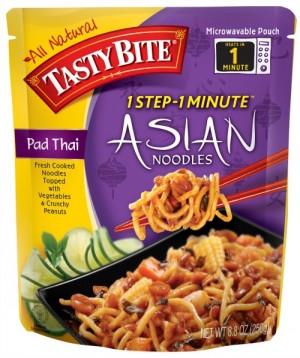 [23]Pad Thai noodles for lunch (easy to use the microwave in a break room), served the Channa Masala paired with Thai Lime Rice in a bowl for dinner, and another time served the Madras Lentils atop brown rice. The Ginger Lentil Rice made a nice side dish for simple roast chicken. These are high quality, carefully spiced, vegetarian, gluten-free meals with no MSG, no preservatives and they’re kosher. What else do you need to take your taste buds on a trip around the world? 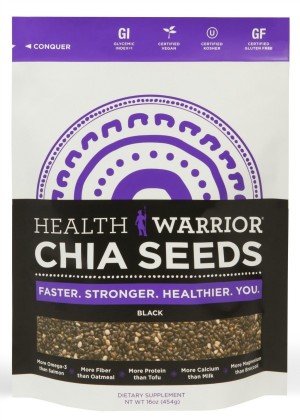 [24]9. Chia seeds: Since discovering chia seeds earlier this year, we’ve been throwing them into everything! They pack a nutritional punch in a small package: 1⁄4 the size of a grain of rice, pound for pound, with  more Omega 3 fatty acids than salmon, more fiber than oatmeal, more protein than tofu, more calcium than milk and more magnesium than broccoli. The only challenge, for some, is to get over the texture issue. When soaked with liquid, chia’s natural coating absorbs 13x its weight, and becomes gel-like, which means the seeds will thicken whatever they soak in. To me, when hydrated they are reminiscent of a tiny version of boba, the chewy tapioca balls that are put in tea drinks.

The latest concoction is the brainchild of Maya, my daughter’s longtime friend. When teenagers are whipping up chia pudding as a snack, you know things are going in the right direction. Try it! 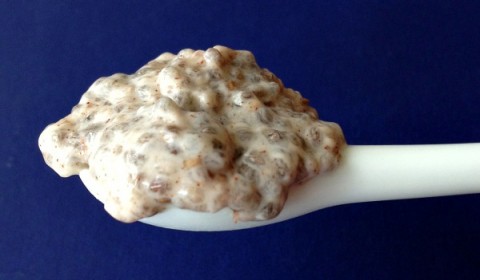 Summary: Creamy, not too sweet and satisfying with just a small portion, this chia pudding makes a great breakfast or snack to tide you over until a meal. Maya eats it as a dessert. Warning: this is not such a lovely dish to look at. Don’t worry…it tastes good! 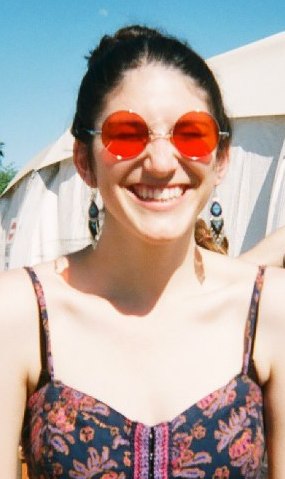 Sometimes Maya uses mashed banana instead of the coconut milk. 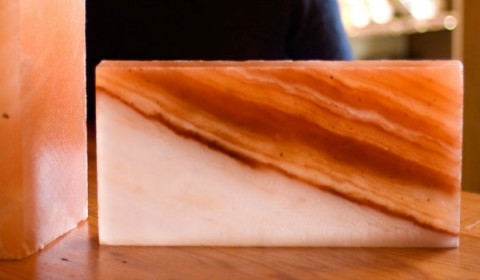 [28]10. Salt blocks: I’m a sucker for ideas that are new to me, and one of the most intriguing new cooking methods I’ve ever heard is that of cooking on salt blocks. A salt block is a big, honkin’ slab of solid pinkish salt from the Salt Range mountains in Pakistan. 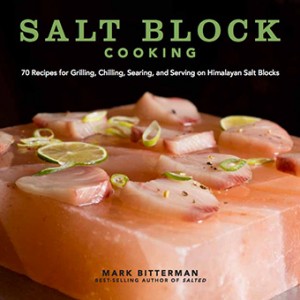 [29]They’re often called Himalayan salt blocks, and you can cook, cure, cool, freeze, caramelize, brown, soften, firm, crisp and show off food using them. Don’t believe me? Peruse the fascinating “Salt Block Cooking: 70 Recipes for Grilling, Chilling, Searing, and Serving on Himalayan Salt Blocks [30],” by Mark Bitterman (2013; Andrews McMeel Publishing; $24.99). I am particularly intrigued by the simple ideas of serving cut watermelon on them, or Salt and Pepper Semi-Cured Hamachi Sashimi, or Salt Block Cucumber Salad, and believe it or not, Salt-Cured Strawberry Ice Cream. About his Salt-Baked Chocolate Chip-Oatmeal Whoppers (cookies), he says, “Salt is the one substance that can magically transport a flavor from one place to another, from the present in the beyond.” Now, don’t you want to read more?